Theory and Model of ICA/BSS

The signal X_bar is the result by ICA artifact removal. In Letswave7, step 2 and 4 can be completed automatically, in which pinv(A), also called unmixing matrix, is the pseudo inverse matrix for matrix A. Step 1 (computer ICA matrix) and step 3 (identify artifact component) need to be performed manually. Hence, in Letswave7, we need two steps to finish the work of artifact removal by ICA. 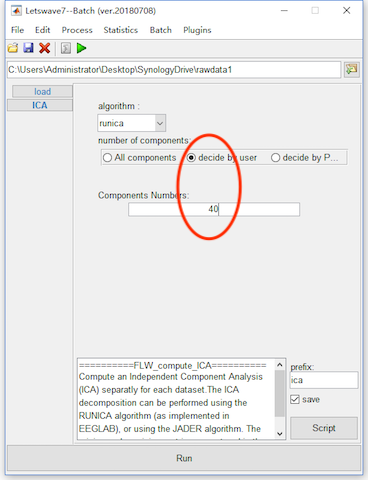 After we obtain the ICA matrix, the mixing matrix A and the unmixing matrix pinv(A), we need to identify the components with artifact manually.

Select the dataset “ica chan_interp butt sel_chan sub093”” in the data list of the manager module, and click Process->Spatial filters(ICA/PCA)->Apply ICA/PCA spatial filter in the menu. We will see the interface for manually removing component for spatial filter.

In this interface, different information are marked by different colors. The black color represents the original signal X, color blue for source S, and color orange for the filtered signal X_bar. With the list box in black in the left panel, we can select the dataset, epoch, and channel to check the original signal X as the black curve in the middle panel. Next, we can select the component in blue in the left panel to check the time/frequency/spatial feature of the each component in source S in the bottom panel in blue. After we identify the component as the artifact, we can select them in the right panel in orange. Correspondingly, the orange curve in the middle panel would show the filtered signal X_bar. We can check the result of ICA filter immediately.

In this study, we can identify component 1 as the eye blink artifact. The scalp topography suggest the “equivalent current dipole” (ECD)s close to the eyes. The waveform in the time domain like a spike and the power in the frequency domain concentrates at low frequency band (<5Hz) both suggest this independent component as the eye blink artifact. After we remove this component by select comp 1 in the right panel, the blink artifact has been effectively removed as compared the orange curve X_bar with the black curve X in the middle panel. Similarly, component 2 as the artifact with lateral eye movement. The clear evidence can be observed from the scalp topography.

Select comp 1, comp 2 in the right panel in orange color and click the button OK. A new dataset with the name “sp_filter ica chan_interp butt sel_chan sub093” will be appeared in the data list of the manager module, which is result of artifact removing by ICA. 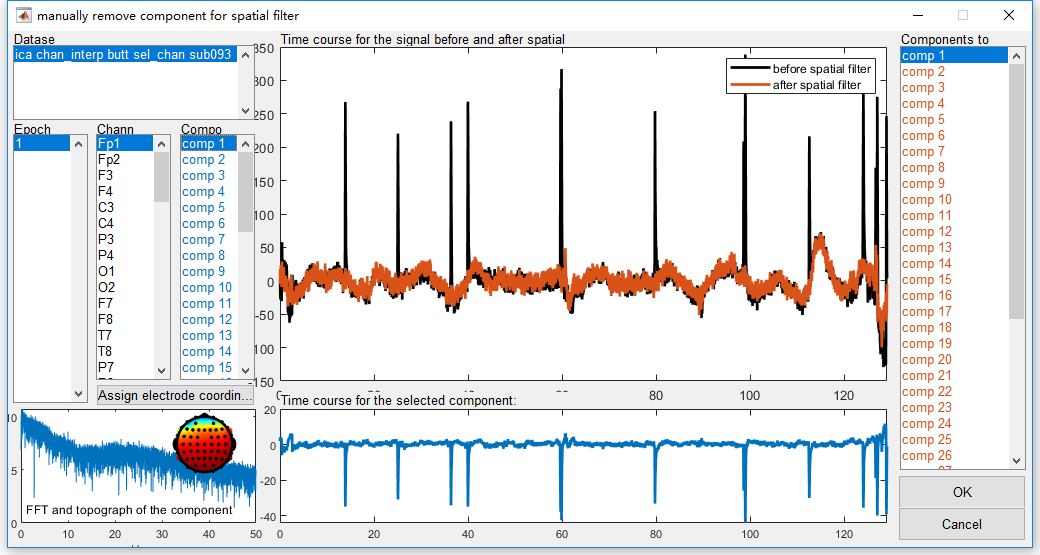 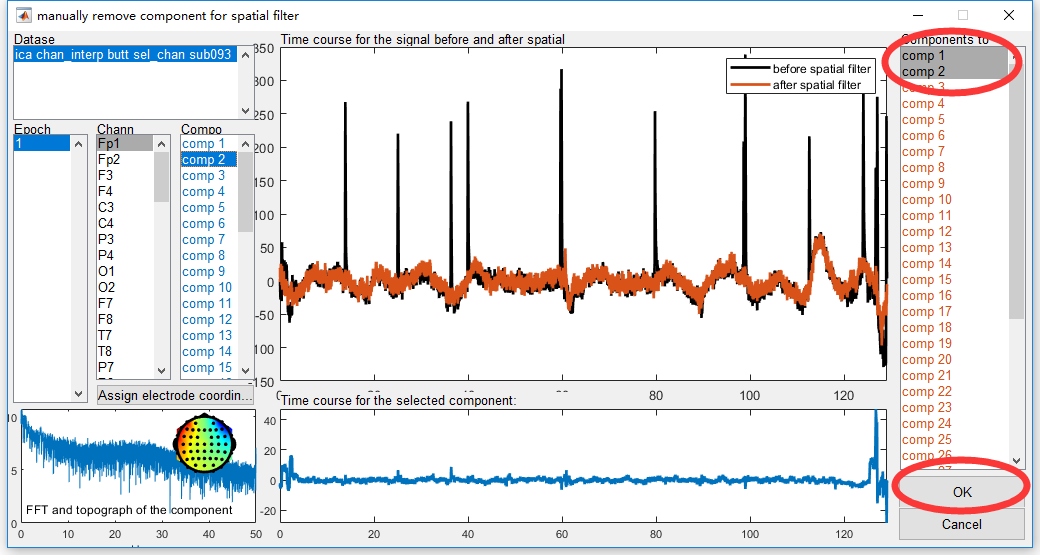 For running the ICA in Letswave7, there are several things need to be discussed.